Krogerus won the award in 2013, when it was bestowed in Finland for the first time.

The Chambers Europe Award honours outstanding law firms on the basis of research carried out by Chambers & Partners, an organisation that ranks law firms and lawyers.

As stated by Chambers: "These awards honour the work of national and international law firms across the region on the basis of research for the upcoming edition of Chambers Europe. They recognise a law firm’s pre-eminence in key countries in the region. They also reflect notable achievements over the past 12 months including outstanding work, impressive strategic growth and excellence in client service." 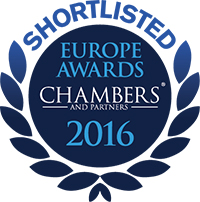 Partner Thomas Kolster together with Of Counsel Gustaf Möller has been nominated as one of the Nordi...